Do you use W3 Total Cache for speeding up WordPress and also the WPML for multilanguage installations?

Well I do. My problem was that it was very hard to identify why the „recent post“ were nearly always displayed and linked in the wrong language.
So in german was „recent post“ and in the english version were „Letzte Beiträge“ displayed.

In the comprehensive collection of Settings in the W3TC plugin, allmost everything was logical and easy to handle with „trial & error“ testing, as it was easy to see the result of the settings.
But the object cache did provide also cool speed results, which is also logical, as an object once loaded it’s much faster in rendering to web page, when it’s called a second time.
And this object caching really works, becaus on this page it’s turned on.

On installations which are using the WordPress Multi Language Plugin, the object caching doesn’t work out, because W3 Total Cache can’t distinguish between the languages.
Aaaand obviously, for the „recent posts“ widget the W3 Total Cache doesn’t get a different object ID. 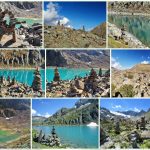